Southern Pomo is one of seven mutually unintelligible Pomoan languages which are native to the Clear Lake and Russian River areas of Northern California. Southern Pomo was spoken from Sebastopol (baṭʰ:inkʰlehčawi ‘at house of elderberry trees’) in the south to Cloverdale (ma:kʰahmo ‘salmon-hole’) in the north. Southern Pomo speakers suffered almost complete genocide at the hands of Spanish, Mexican, and American governments. Those speakers who survived the violence lived to see their children taken away to boarding schools where they were forced to use English.

Three linguists have worked significantly on the language. Abraham Halpern worked on the Cloverdale dialect of Southern Pomo in the late 1930s and early 1940s. His data came from Annie Burke, who lived outside of the historic Southern Pomo area and could speak the Central Pomo of her in-laws in addition to her mother tongue. Halpern later worked with Burke’s daughter, Elsie Allen, in the 1980s. Robert L. Oswalt, who wrote a grammar of the neighboring Kashaya Pomo language, also worked extensively with Southern Pomo throughout the latter half of the twentieth century. He also worked with Elsie Allen, Halpern’s Cloverdale-dialect-speaking consultant, and he collected the best material on the Dry Creek dialect from Elizabeth Dollar. Neil Alexander Walker began studying Southern Pomo in 2000 after meeting the last fluent speaker in the Dry Creek Rancheria Band of Pomo Indians, who was his wife’s paternal great aunt. Walker was able to meet with Oswalt during the last three years of Oswalt’s life and eventually wrote the first grammar of Southern Pomo. (You can view an updated version of Walker’s grammar here).

From October of 2011 to March of 2014 Walker taught Southern Pomo in weekly classes held by the Dry Creek Rancheria Band of Pomo Indians. In April of 2014 these classes stopped and were restarted by WIELD. The California Indian Museum and Cultural Center generously allowed WIELD to use their large conference space to hold Southern Pomo classes till the end of the term.

Below is a sample handout from the most recent round of Southern Pomo classes:

Click here for a draft of a textual dictionary of Southern Pomo.

Click here for a PC keyboard for the alphabet used to write Southern Pomo.

Photos from the Southern Pomo classes taught at the CIMCC: 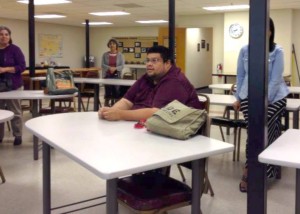